Me: Why do you ask so many questions Pranati? My head is paining kanna.
Pranati: ((No response)), As usual continues her very important task of asking questions.

Morals of the story: Be careful what you tell kids, And, Life is a circle :-)

Yes, we are absolutely proud to be  mothers, wives, daughters, sisters and daughter-in-laws.
We are glad that we have the womb of life.
We are pleased with the multifaceted personalities that sometimes we portray to the world.
We are thankful that we are special and many of nature's faces are considered to be feminine.
We are happy with the god-given gift of multitasking.

But, besides these, we are also fearful of the dangers surrounding women in today's world in which a few see women as mere objects of desire and impose Wild and atrocious violence towards them.

Women's Day is comprised not only of draping sarees, celebrating in White-And-Purple-And-Green colours and considering it a special day dedicated to women. The true spirit of Women's Day evolves only when "those few" consider women as another human being more than anything else, and stop their monsterous activities.

Nevertheless, women are special, and I am proud to be a woman :-)

Wishing all the women a very happy Women's Day !!!

My wishlist is as long as a giraffe. But, I have tried to reduce it to a baby giraffe's size, listing out only those wishes which hit my head hard, as I soon as started typing this post on Notepad. (Words related to Giraffe above -- Influence of my kid on me, as I deal with a lot of animal stories and characters during the day with my kid :-) )
-- I wish that people stop being judgemental. Yes, I have been judgemental about others many times. But, when I am at the receiving end, I feel the true effect.  On the same lines, I also wish that I accept people as they are and others accept me as I am, with no "Terms and conditions" attached.
-- I wish that I have all the patience in the world. Guess for what? Not for solving world issues. Not for doing major heart and brain surgeries. But, to handle my three-and-a-half-year old daughter. To answer her questions. To convince her to do the right thing. To make her understand that its not my wish to scold her, and I scold and advise her only for her sake. To listen and handle her tantrums.
On a separate note, I am glad that this wish is being granted to me on a daily installment basis. Yes, I am learning to be more patient day-by-day, only because I have converted myself from Mrs.R**** to Mom.R**** :-)
-- I wish that I have the tolerance level to: Tolerate pain - both physical and mental. Tolerate life's tests on you. Tolerate stupid behaviour of some people. Tolerate accusations against you. Last but not the least, to tolerate Namma Bengaluru's traffic jams :-)

Here is the banner of Preeti Shenoy's latest book...

Posted by Live n Present at 1:32 PM No comments:

Here comes Navratri 2012 at our home, though at a delay of three days. It was supposed to start on Oct 16th. But, at our home, as my people were out of station, we declared holiday for Durga Devi (The first three days are dedicated to Goddess Durga) and Lakshmi Devi and Saraswathi Matha came here yesterday night.

So, with myself and my daughter dear in tow, I started with the task of assembling the Golu steps and placing the Golu "Bommai-s". I had outsourced the task of assembling the iron steps to the electrician of our apartment. He promptly came at 6 PM yesterday night and started assembling the steps with a disclaimer that “Madam, I am an L-board at this. So, please help me and bear with my mistakes”. And there we were, putting our minds into action and somehow completely assembled the steps (Though with a couple of rectifiable mistakes that we committed).

And all this while, my daughter dear was very co-operative and did not pose any threat to us J by doing stunts with the steps. She was watching cartoon, helping us also (by tightening the nuts and bolts, though her level of strength did not co-operate for that).

So, after an effort of 2 hours, we finished the assembly. And then started the laborious task of taking out the doll cartons from the loft, opening them, open the wrapped dolls (there are around 100 dolls) and assemble them in a particular order on the steps.

The electrician left and my daughter was super-excited at the word of “dolls”. I had to really negotiate with her to convince her that we will keep the dolls after both of our dinners are over. So, she was patient enough and I was glad enough.
So, the assembling of the dolls and the cleanup took another 1.5 hours. It was 10.30 PM when we hit the bed. My daughter was super-tired and was starting to get cranky due to all the doll excitement. She told the steps with the dolls on them were looking niceJ.. The fruit after the effort….

And today morning, my people came back from their travel to Chennai. There were some new dolls bought (Chennai is famous for all this)…A cow with all gods/goddesses embellishment, the “crow-drinking-from-pot” doll, two small decorative elephants and a cutie little Krishna…All were cute and some good additions to the doll-o-collection we have…

Here are some snaps from this year’s Golu… 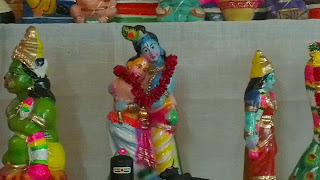 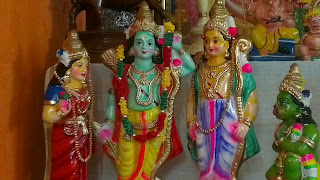 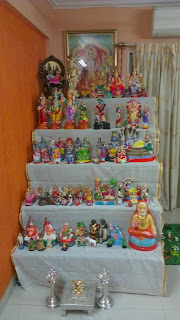 Posted by Live n Present at 4:49 PM No comments:

Email ThisBlogThis!Share to TwitterShare to FacebookShare to Pinterest
Labels: Homefront

The Second PTM - End of Term 1

Overall, I was happy with the PTM. Got some books from the book sale which is conducted in the school during PTMs. And as usual, my daughter and books have a great bond. Seeing the books, she felt very happy :-)

Today was my kid's first ever Sports Day of her life, in school. She went all decked up in sports wear - white full sleeved shirt, blue track pant and white canvas shoes (all bought for this specific purpose, and of course, for future use also).

Last Saturday, her teacher called me up and told me the following: "P******* gets very excited if she goes to the playground. She does not put in her hear the words told by us. We are giving the kids practice for sports day. So, please speak to her and tell her that she has to listen to her PT Sir when he is giving instructions/practice". I was telling this to everyone for the past 2 days, smiling of the fact what all complaints I have to get from her teacher :-)

So, for the next few days, we were keeping on telling her that she has to run only after "1,2 and 3" and should lister to her teacher and PT Sir. She nodded her head and told "ok, yes" for everything. Today was the D-Day and she went happily to school, as usual.

During the noon, she slept off even before I called. I got the information from my MIL that she herself told that she came first in the race at school. LOL. I am not sure whether she is telling things out of imagination or whether really that was the case. And, nothing was written in her diary also it seems. I need to go home in the evening from office and try to get some information from her. I called her school to talk to her teacher regarding this but could not get her as they had already left by 12.30 PM.

I have to wait till tomorrow to get the update from her teacher about my kid's life's first sports day event :-)

Posted by Live n Present at 2:32 PM No comments:

Lal Bagh in Bengaluru conducts some AMAZING, (read it as A-M-A-Z-I-N-G and B-E-A-U-T-I-F-U-L) flower shows for Republic Day and Independence Day. After gaining interest in photography, I made it a point to visit it to click some pictures of the flower beauties to my heart's content. And yes, it happened.

Me and my friend, loaded with my Nikon SLR, went to Lal Bagh for the Republic Day flower show, from office (on a weekday, yes, it added to the thrill to go from workplace:-), Sorry, my organization) just to click pictures. We were surprised to see a lot of crowd on a weekday and were asking each other whether so many people are jobless like us :-)

But, unfortunately, the pictures did not turn out very well when seen on a PC as I had set the SLR in some crappy mode and didn't check the setting before clicking the photographs. Thus went the Republic Day photography session, unfruitful.

Then came the Independence Day flower show. I was cautious this time to click some real good pictures. I double-checked my settings on my SLR and the lens with my husband also. Sure that everything was ok, I again ventured out for photography (again on a weekday, but sans my friend, as she was onsite for work). I clicked around 140 pictures and mostly they were on "Aperture" setting mode, using a zoom lens. I had kept researching on different modes in photography and want to try out the background blurring mainly by setting the Aperture. And voila !!! What a result it had...The pictures turned out very good and I was satisfied very much. And I should really mention that the flowers collection and the arrangement in the flower show was just awesome. They had sculptures like panda bear, ducks, tree house all made of flowers. Very good show and I caught hold of some very good shots !! I used those shots to upload into my photography project at http://365project.org/reks/365 which is one-photo-a-day site and got good comments from my fellow 365ers.

Here is a slideshow of some of the pics taken in the flower show.

Me: This is pillow.

Live n Present
Bengaluru, Karnataka, India
It started as a normal blog with feelings of Interest (That I have to write well), Hesitation (on what to write), Inhibition (What will others think on my writing), Inhibition (that I should not get not-so-good comments) etc... And today, after many years, here I am, with an update to my profile. This blog has taken many turns, by having topics from fancy writing to daily life to recipes and now with updates of my daughter's day-to-day life and her growing up. I am glad I am doing this and I hope it continues so that she has a good laugh on seeing this blog when she grows. For your information, my sweet little daughter has completed 3 years in July 2012, and I will address her as "Kanna" (sometimes) in the blog (a baby-ish slang to address children).